Finding a stud dog is a lot like a lady looking for a man… there are plenty of options around, but how does one select the “right” one? 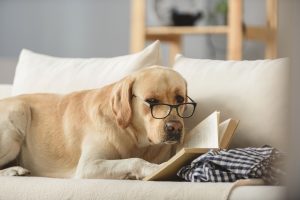 Next, you’ll want to learn about the inheritance of the traits you’re looking to change… and try to find a stud who has ancestors who don’t carry any recessive genes that you don’t want involved in the creation of puppies. When in doubt, check a stud’s siblings out to see what kind of traits they have.

Make Sure the Math Adds Up

Also, did you know you can find programs that help you figure out the coefficient of inbreeding for a proposed pedigree? How inbred would your puppies end up being? You can find that out thanks to science and math. If you want healthy puppies, look for parents with lower coefficients of inbreeding.

When looking for the “right” stud, arrange to meet potentials in person. Of course, you can see pictures and even videos online, but it always helps to spend time with potential studs in person to see their temperaments as well as faults.

When all else is equal, pick the less-used sire over the popular one. It’s also advisable to choose a middle-aged or older sire rather than a young one. If a dog is still alive at an old age, it shows potential for their offspring to live a long life, too.

Of course, location matters when choosing a stud. It makes sense to go with one that’s not too far away, in order to save expenses in getting to that dog, etc. That said, semen can be shipped, so that’s a nice option.

Hidden Pond Labradors in Upstate New York is a certified pedigree Labrador stud service provider. Breeding black, yellow and chocolate labs, some of which are offered as studs, Hidden Pond can ship semen nationwide to meet the needs of breeders.